What would really happen to air quality in Alhambra if they build a tunnel?

At Metro’s informational meeting on March 12, 2015, the CalTrans/Metro consultant explained that there would be no significant improvement to air pollution if a tunnel is built, but actually, the tunnel would increase VMT and C02 emissions!

At that meeting, Councilmember Placido asked the consultants if air quality would improve in the area, but the answer was “no.” Alhambra Councilwoman Messina has insisted that the tunnel would produce “virgin air”  into the atmosphere.

See for yourself: as shown in Table 4-8 of the EIR , the tunnel would increase VMT and  CO2 emissions: (do a “find Table 4-8”), all the tunnel projects result in significant increases in actual and per capita CO2 emissions, directly contradicting State and regional efforts to reduce greenhouse gas emissions.

If only Alhambra City Council had waited for the EIR before spending tax payer $$$$$ on the Fremont Banners and “Close the Gap” promo days that touted “cleaner air”. 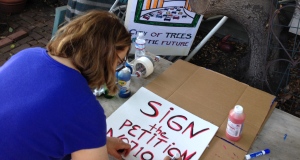 Sign the petition NOW! Remove the Tunnel Alternative in Favor of Better Alternatives