Historic moment: Alhambra works with South Pasadena and Pasadena to say goodbye to the 710 freeway connection – and request money!

Now that Metro/Caltrans has chosen #4 out of the 5 possibilities for the 710 freeway, it’s time to dole out some of the tax monies set aside from Measure R (approximately $25/year per LA County resident since 2009). to synchronize lights, widen streets and do other street improvement projects. Alhambra has jumped in on the request with South Pasadena and Pasadena to get additional money; in particular, in a letter signed by the three mayors, Alhambra is requesting $100M to do something with the 710 stub  Valley and the 10 freeway. (Tri-Cities Early Action Projects Letter – 11-26-18)

Unlike Pasadena and other cities, that for several years have been  considering solutions and design plans for its stub, Alhambra officials have not publicly discussed alternatives to the freeway tunnel they had their hearts set on for 60 years.  The current Mayor of Alhambra Jeff Maloney told the Alhambra Source, “We need to do a lot of research and studying of the issue,” (Nov. 29, 2018, Alhambra Source “The 710 Tunnel is Officially Off the Table”), but is considering a green belt in place of the asphalt on- and offramps  leading from and to the 10 freeway from Valley Boulevard.  Alhambra is requesting $100M from Metro/CalTrans to  help fund such a project.

Dear Chair Kuehl and Metro Board of Directors,

The cities of Alhambra, Pasadena, and South Pasadena (Cities) commend the Los Angeles County Metropolitan Transportation Authority (Metro) Board of Directors’ decision to allocate the remaining Measure R funding dedicated to the State Route 710 (SR-710) towards the implementation of “corrective measures to contain the regional traffic on the freeway system and minimize impacts on the local street network.” In anticipation of the Metro Board approving the initial list of State Route 710 (SR-710) Early Action Projects (EAPs) on December 6, 2018, the Cities would like to demonstrate their united support for three cross-jurisdictional projects that will provide significant benefits to the San Gabriel Valley. These projects include:

1. Removal of the SR-710 freeway stub in Alhambra between the I-10 and Valley Boulevard;

2. Completion of the SR-110 Hookramp Project in the City of South Pasadena; and

3. Removal of the SR-710 freeway stub in Pasadena between the I-210 and California Boulevard.

During the November 15, 2018, Metro Ad Hoc Congestion, Highway, and Roads Committee Meeting, the Committee recommended funding for the SR-110 Hookramp Project ($38 million) and SR-710 North of I-10 Termination Project ($100 million). In order to optimize the success of these two projects funding for the Pasadena I-210 Ramp Modifications Project should also be provided. It is through the combination of these three projects that we can effectively divert regional traffic away from the corridor and minimize traffic congestion on local streets.

If you have any questions or comments please feel free to contact Margaret Lin, Principal Management Analyst, at MLin@southpasadenaca.gov or (626)403-7236. 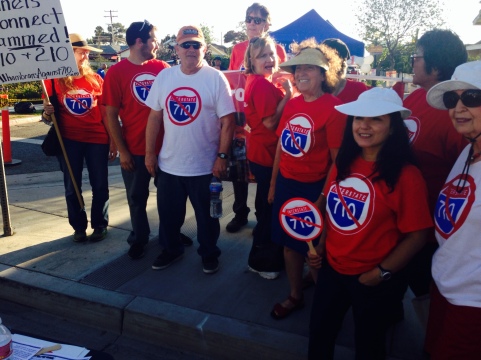 Some of the Alhambran group on 7-10-2014 at the City-sponsored “Close the Gap” day (when the City closed off Fremont for 1/2 day to push for the 710 freeway tunnel, causing major traffic on Fremont.)