the view of angry commuters – thanks for closing down the street during rush hour for your silly party! 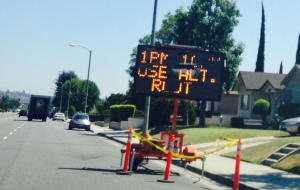 in a good mood despite the blazing sun

The City of Alhambra closes off the street at Fremont and Valley, telling drivers to ‘find an alternate route’.

The City claims it wants to build the freeway tunnel to alleviate traffic, but then creates a traffic jam.

Alhambrans Against 710 were on site to answer questions of many confused neighbors who had no clue about the proposed toll to use the tunnel, or lack of on- and off-ramps, the dangers,  or the alternatives.

A contributing writer wrote a prologue to Gridlock Day.

some of the group